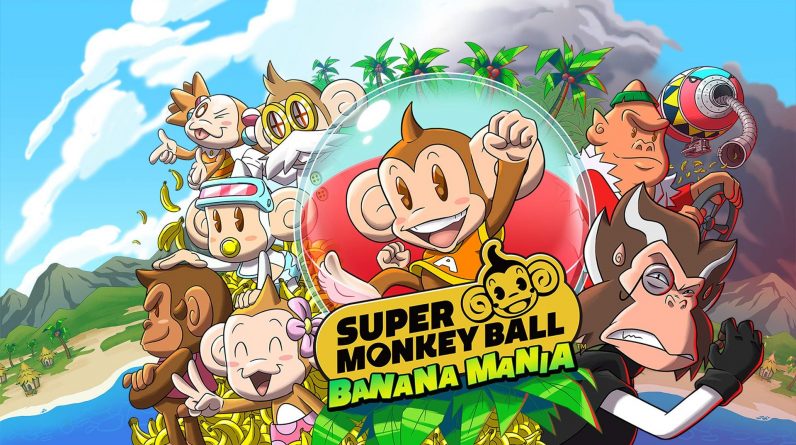 Yo-ho, banana maniacs, and welcome back to the wondrous worlds of Super Monkey Ball! AiAi and all your favorite monkeys are rolling out for a new adventure in Super Monkey Ball Banana Mania — out now on Xbox One and Xbox Series X|S!

Most significantly, the Super Monkey Ball universe has been colorfully revitalized, with vibrant new textures, environments, decorations and so much more. The original monkey gang have come a long way since they first debuted in arcades (banana joystick and all!) 20 years ago…

AiAi’s new look marks a steady evolution from his first appearance in arcades (2001’s Monkey Ball) and Xbox (2005’s Super Monkey Ball Deluxe). The lovable leader of the monkey gang has always sported his trademark orange ‘A’ tee, though his stylish hair swoop has gone through a makeover or two. His Banana Mania model is even more colorful and expressive, replete with joyful animations as he rolls out for adventure:

MeeMee, the gang’s charming matriarch, has also seen her look evolve over the years. This kind soul first adorned her favorite polka-dot dress a decade ago (2011’s Super Monkey Ball 3D) but has never lost her love for picking fresh flowers:

The most radical evolution has to be everyone’s favorite genius Baby! Monkey Ball lore masters may recall this adorable young monkey’s origins as a time traveler from the future when he came back to help his parents thwart Dr. Bad-Boon’s nefarious schemes in 2002’s Super Monkey Ball 2! The high-tech visor he first picked up in 2010’s Super Monkey Ball Step & Roll is a nod to his scifi “past” (though he’s never parted with his trusty pacifier aka tantrum soother).

And not to be forgotten is GonGon, the muscle-bound monkey with a heart of gold. This mighty gorilla has similarly gone through a few iterations throughout all his Jungle Island adventures:

We’re also absolutely thrilled to debut the gang’s newest look in the launch trailer for Super Monkey Ball Banana Mania! Sega partnered with Powerhouse Animation to bring the gang to life in stunning hand-drawn 2D animation. The animated launch trailer also features an original track by Hyper Potions. See if you can catch every Sega easter egg hidden in the gang’s first appearance in animated form!

Be sure to follow the official Super Monkey Ball social channels for concept art and the inside story on how AiAi and gang came to life in animated form.

If you’re interested in more behind-the-scenes art from throughout SMB history, check out the limited-edition physical release of Super Monkey Ball Banana Mania! The 20th Anniversary physical edition of the game comes with a 40-page art book featuring art from every game in the series straight from the Sega archives. It also includes a collectible sleeve, reversible cover, and 10 exclusive cosmetic items. This was our way of celebrating this beloved series with our most passionate fans around the world.

Learn more about the game and Super Monkey Ball during the Xbox Play streaming session on October 8, 2021 from 8am – 11am PDT, or you can watch the VOD from the archive section! Super Monkey Ball Banana Mania is out now on Xbox One and Xbox Series X|S. We’ll catch you back on Jungle Island next time, banana maniacs!

Roll through wondrous worlds with AiAi and friends as you race to stop monkey mad scientist Dr. Bad-Boon from blowing up Jungle Island! Join the all-star monkey team of AiAi, MeeMee, GonGon, Baby, YanYan and Doctor as you bounce, tilt, and roll your way across hundreds of delightfully crafted levels and mazes. It’s monkey business for the gang as you take down Dr. Bad-Boon and steal back your beloved bananas!