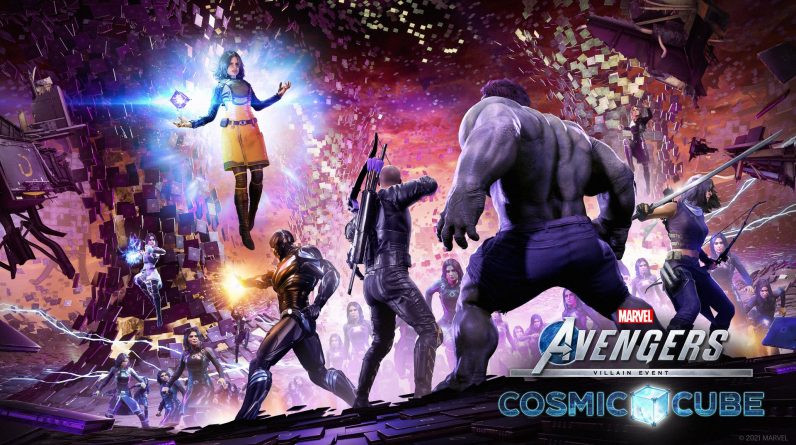 The future is in peril. The Avengers need to work together to take down the Scientist Supreme before she can bring about an apocalypse. The new Beating the Odds Villain Sector and the Cosmic Threat Event are available now!

Trails of Cosmic energy have been circulating around the globe, which lead the Avengers to Monica’s secret weapon — tracking down these Cosmic signatures is how Beating the Odds begins. You’ll track the trail to a heavily guarded AIM facility and fight through to the final chamber, which houses a giant, mysterious, and undoubtedly powerful cube. This is the Cosmic Cube, the true form of Project Omega, and Monica can’t wait to show you just how powerful it is in the final battle of the Villain Sector.

This is a brand-new fight unlike any we’ve created before. Though the future is always to some degree uncertain, with our Cosmic Cube dev tips from Principal Designer Jason Botta, you can ready up with confidence to beat the odds! Here’s some pointers for how to emerge from the chaos victorious:

Additionally, the showdown happens in a colorfully unstable and captivatingly picturesque arena the likes of which haven’t been seen yet in Marvel’s Avengers. Digital photographers, make sure you bring your cameras and snap some shots while you’re there!

Beating the Odds is available now on the War Table in the Snowy Tundra and can be played with any Hero with Power Level 35+.

Minor Missions rewards (a total of eight, one themed per Hero) require the use of specific Hero abilities or the completion of general objectives. Completing these missions will reward the themed Hero a scaling quality gear if that Hero is below PL 120. If that Hero is PL 120+, you’ll be rewarded with a Tachyon Exotic.

The Major Mission – A Cosmic Threat will require you to beat the new Villain Sector, defeat a large number of enemies in Cosmic Threat Sectors, and deal plenty of sweet Cosmic damage. Rewards include a new animated team nameplate and Hero specific gear.

We’re looking forward to hearing how you like the Cosmic Cube Event and seeing all the quality content you create from it! Share with us your favorite cube-busting builds and ethereal photos on our social channels and official Discord server. See you in the future!

Marvel’s Avengers is an epic, third-person, action-adventure game that combines an original, cinematic story with single-player and co-operative gameplay*. Take the essential Super Hero gaming experience to another level! Marvel’s Avengers will be available for next-gen consoles at no extra cost.* This version will boast a wide spectrum of improvements to visuals and speed, and will be backwards compatible in single and multiplayer. Marvel’s Avengers has a beautiful world filled with exquisite detail, and with improved Heroics, destruction, graphical fidelity, and framerate versus previous gen, you won’t be missing any of it. Get right into the action with fast loading times and be blown away by the striking detail of enhanced destructive visuals that make Heroics feel truly in your hands. Marvel’s Avengers will support save file transfer and cross-gen play so you can pick up right where you left off and continue fighting AIM with your favorite Super Hero squad. We’re excited to herald in the next generation of consoles on Marvel’s Avengers!

*Upgrading from the disk version will require the next-gen version of the same console with a disk drive.

**Credits that you purchase are useable on Xbox Series X|S Console version of Marvel’s Avengers. Please be aware that the Credit that you own is synced with your Microsoft account, and the wallet will be shared through both platforms.