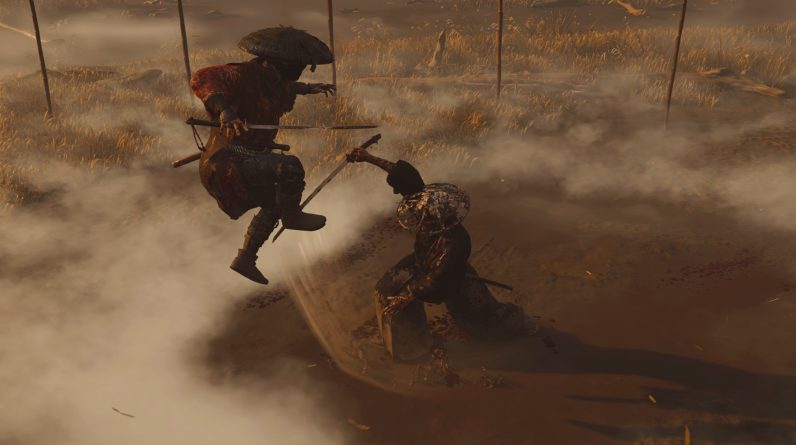 Learn the Tale of Kojiro

Speak to the man to learn of a deadly Ronin named Kojiro who turned into a demon and was granted magical armor. Now five killers have joined Kojiro and want to duel you to the death.

In order to fight the man called Kojiro, you must find and defeat all five killers before your duel with Kojiro can begin.

There are 5 duels you can partake in across the Toyotama region – some of which you may have already encountered on your way to Umugi before taking on this quest. If this is the case, you’ll already be well on your way to completing this quest. They always appear in arenas featuring three sashimono banners – red, blue, and yellow.

1v1 Duels can be extremely tough – they require a lot of patience and reading your enemies attacks without getting too greedy yourself. Since your attacks are limited (no ghost weapons, and you’ll always want to be in Stone Stance), it’s essential that you prepare accordingly. Make sure you have charms and gear equipped to maximize your potential, or give you defensive options if you’re having trouble. Invest in techniques to make certain piercing attacks able to be parried, as well as advanced Stone Stance techniques to perform heavy strikes with more staggering power or faster.

You can find the five assassins in arenas across the region at the following locations:

The Duel in the Drowning Marsh

Located south of the Old Kanazawa Marsh in the Umugi prefecture, where the river turns into a delta as it empties into the sea, creating several small islands – one of which is where the assassin waits.

Duel Among the Spider Lilies

Located on the north side of the Field of the Equinox Flower, also in the Umugi prefecture, look for a raised hill above the fields full of red flowers, north of two large pools of water where a haiku spot is, and on the opposite end of the field where the Scarlet Rock Shrine is.

Located on the northern end of the Otsuna prefecture along the coast, under a giant waterfall above the Musashi Coast, and just southeast of Lucky Genzo’s Inn. The duel takes place at the base of the falls, which will likely require you to carefully climb down from the northern cliffs around the falls to engage in the duel.

Located on the far eastern edge of the Kushi prefecture, you can find this duel along the shore below Cloud Ridge Shrine, located just north of Urashima’s Village. You can descend down to the shore safely by following the road past the graveyard into the shrine area, and keep following the tori gates as the path circles the rocky platforms and curves down to the shore – where the duel takes place.

Located at the top northeastern corner of the Kubara prefecture and the entire Toyotama region. You can find this duel at the edge of the map by following the far eastern road all the way up north – from Urashima’s Village and the site of the last duel all the way up past the Secluded Lighthouse, and to the right of Yamabushi’s Peak to where the fighter awaits you.

Return to the Musician and Face Kojiro

Once all the fighters have been eliminated, it’s time to find Kojiro. Return to the musician and learn that Kojiro is waiting for one final duel. He’s waiting near your old home in the western part of the Kubara prefecture, southwest of Omi Village and Mount Omi, in a cave by a monastery.

Enter the monastery, and look for water coming from a cave behind the giant statue, and enter inside.

Duel on the Mirror of Sacred Light

As you might expect, Kojiro will be the most powerful of all the 1v1 duels you’ll have in this quest. He’s fast and can deal a ton of damage, and it’s strongly recommended you take out mongol camps to get gold and upgrade your sword, as well as upgrading melee-focused armor. You should also seek out any Hot Springs in the region, and be sure to invest in major and minor charms to increase your power or defense (focusing on increasing stagger damage can also be useful for breaking his defense quickly).

Kojiro will utilize many of the attacks you’ve faced thus far, and will add extra hits when he gets low on health. Watch out for the following attacks – and if you see him unsheathe his sword, try to hit him before he gets the chance to get ready to unsheathe and strike, as many times he won’t be able to defend in time. Other attacks can include:

Take the time to memorize his patterns and learn which strikes leave him vulnerable, and which ones don’t. Don’t get too impatient, and strike back 1-3 times before getting ready to face his next move. Strike too often – especially with heavy attacks, and he’ll easily sidestep and counter before you can reorient yourself.

Once Kojiro has been defeated, Jin will take the armor for himself to put it to better use, and the quest will conclude.