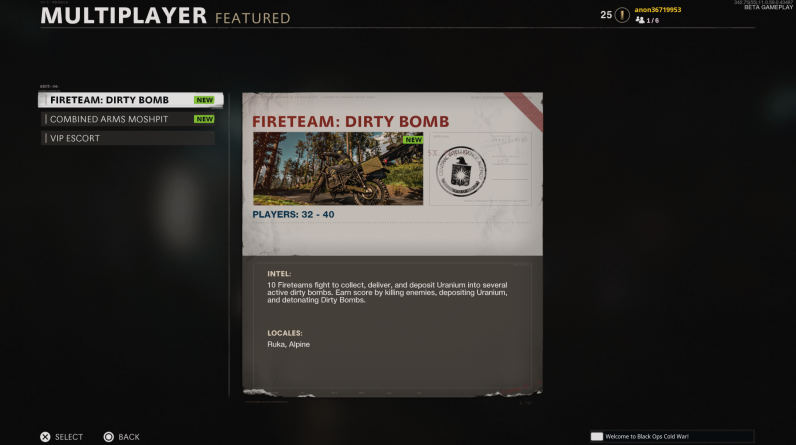 Fireteam is described as a massive Multiplayer experience that features 10 teams of four players as they are dropped into some of Black Ops Cold War’s largest maps.

During the Dirty Bomb game mode, teams will be required to collect and deposit uranium into “Dirty Bombs”. These bombs will have the potential to wipe out entire parts of the map from play as they are exposed to radiation.

With Loadouts and Vehicles playing a major factor in the game mode, teams will need to eliminate their opponents and detonate bombs in order to win. Teams can earn points by eliminating enemies, depositing uranium, and detonating bombs, with the first team to the score limit receiving the victory.

Get the advantage on your opponents with these tips from Matt Scronce, Lead Designer at Treyarch.

VIP Escort is one of Cold War’s newest multiplayer modes, which sees one random player from the Escorting side become the designated VIP each round. The VIP team will lose should the VIP be eliminated or the two-and-a-half minute timer reaches zero.

If the opposing team is unable to stop the escorting team from reaching one of the two Excavation sites or are simply wiped out, they will lose the round, awarding the other team a point.

With up to six players on each team, you’ll want to avoid dying as the game mode prohibits respawns, with the only exception being made to the VIP who will instead be downed.

Tips and Tricks for VIP Escort:

Supporting teams of up to 12v12, Combined Arms: Assault will see two teams tasked with capturing every objective on the map. With a neutral starting point in the middle of the map, the first team that captures the objective will activate a new objective zone closer to the enemies base – essentially acting as a game of tug-a-war.

As each team gets kills and captures zones, they will build momentum. This can be used to reduce the amount of time needed to capture the next zone.

Should your game reach overtime, the first team to capture the neutral zone will win.

Combined Arms: Domination is essentially a larger scale take on the classic Domination game mode. Instead of just three potential capture zones, you’ll potentially have to secure several more depending on the map.

With team sizes increasing to 12v12, you’ll now have access to vehicles that range from Tanks, Snowmobiles, Wakerunners, and Gunboats.

Featuring no half-time, the first team to reach 400 points will win the match.

Team Deathmatch sees two teams go head to head in the classic elimination-based mode. With team sizes ranging from 6v6 and 12v12, games will be limited to just 10 minutes.

Don’t be too surprised though if the match ends early, as the first team that reaches the set target of kills will automatically win the game.

Unlike VIP Escort, players will have unlimited respawns throughout the match.

Domination is essentially a more simplified version of its Combined Arms variation as the mode sees two teams of 6v6 go head to head as they attempt to control three different locations that are marked as A, B, and C on the map.

Teams can capture these objective zones by standing inside them for a short period of time. Each time an area is captured, your team will earn one point every few seconds, which is then multiplied by the amount of objective zones that your team currently have captured.

Halftime will occur once a team reaches 100 points, which will see the two teams switch sides.

Tips and Tricks for Domination:

Similar to Domination, Hardpoint is yet another classic Call of Duty game mode that sees two teams of 6v6 go head to head for a rotating objective area known as the Hardpoint.

Lasting for 5 minutes, player will gain points for the amount of time they they control the Hardpoint. These objective zones will rotate every minute, keeping players constantly on the move.

Teams can win a match by either reaching 250 points first or having the highest point total after the 5 minute timer is up.

Tips and Tricks for Hardpoint: