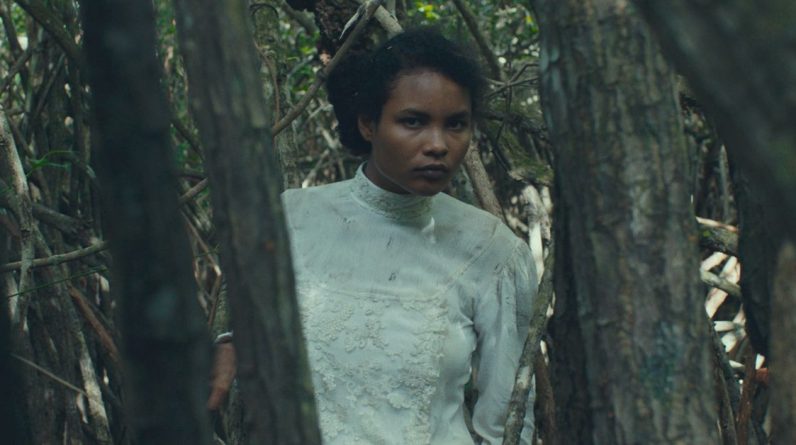 The story of human civilization always comes back to this: Our desire to consume outweighs our responsibility to preserve. The histories of colonization and capitalism are tied up in that ideology, particularly in how those dual forces burned a destructive path through Latin America. Filmmaker Yulene Olaizola puts a spooky spin on this damaging history with her slow-moving, atmospheric, unnerving Netflix fantasy-thriller film Selva Trágica, or Tragic Jungle.

Set in the jungle along the border of Mexico and Belize in 1920, the fictional Tragic Jungle intentionally places itself in a broader conversation about the ruination of the natural world at the behest of businesses and their masters. With elements of folk-horror, Tragic Jungle sets up an array of characters fighting over scarcity, performing back-breaking labor for low wages. The plot nods to the realities of the region’s history: Over centuries, Dole’s banana and pineapple plantations have severely damaged the environment, in particular in Central America. International corporations take advantage of the lower costs of doing business in South America, leading to increased port sector development and dredging, water contamination, and deforestation in countries like Brazil.

Even the history of chewing gum, as chronicled in the 2009 book Chicle: The Chewing Gum of the Americans by Mayan archaeologist Jennifer P. Mathews, is tied up in exploitation. Although the Mayans and Aztecs learned how to cut sapodilla trees to collect resin and create gum hundreds of years ago, the one-two punch of European settlers and American investors exacerbated international demand. At least 25% of sapodilla trees in Mexico were killed by the mid-1930s, and the country’s economy swelled, then collapsed. “This unsustainable industry set into motion another so-called collapse of Maya civilization that continues to have an effect today,” Mathews wrote in Chicle.

Tragic Jungle doesn’t explicitly lay out all this context at first. While Olaizola’s film gets increasingly pointed about the corruptive influence of the free market, it simultaneously explores the Mayan myth of Xtabay. Throughout the Yucatán Peninsula and Belize, the female demon Xtabay is said to lure men into the jungle and toward their deaths. She appears out of thin air to seduce and confuse, she always wears a white dress, and her long hair hangs loose and free. The morning-glory vine that blossoms into white trumpeted flowers can indicate her presence, as can the sacred Mayan ceiba tree, which signifies the earth’s connection to heaven above and the underworld below. If Xtabay, who is thought to indiscriminately enthrall and kill those who lust after her, had a motto, it would basically be something along the lines of “Men ain’t shit.”

Tragic Jungle begins with a trespass, and then an escape. A group of gum harvesters work the zapote trees in an isolated patch of forest on the Mexico/Belize border. They tie themselves to the trees with loose coils of rope, dig their feet into the tree trunks, and slash diagonally into the bark, revealing blood-red wood that oozes white resin. When they’re done with a section of trunk, they hoist themselves further upward, closer to the howler monkeys that live in the lush jungle canopy, loudly announcing their territorial presence. Cinematographer Sofia Oggioni captures the danger of the men’s work by shooting from above and below, positioning these men as parasites clinging to the 60- to 85-foot-tall trees. The workers might be familiar with the land, but they don’t own it, and perhaps, from a conservationist point of view, they never should.

Back at camp, the men cook the resin into gum that they need to transport out of the jungle and deliver to their boss. The group is a mixture of Mayan- and Spanish-speaking men (indicating Belize’s indigenous history, and Spanish invasion and aggression) led by Ausencio (Gilberto Barraza), who is stern and reckless. Meanwhile, in another part of the forest, Belizean woman Agnes (Indira Rubie Andrewin) is on the run from an arranged marriage to Cacique (Dale Carley). In her long, white lace dress, brown leather boots, and pearl and moonstone jewelry, Agnes looks supremely out of place among the countless shades of green, the calf-deep murky water, and the insects, alligators, and jaguars who call the jungle home. She’s timid in this foreign place, but her desperation to remain free outweighs any fear.

Tragic Jungle shifts into sharp focus when Agnes crosses paths with these men, and it reveals itself as a re-creation of the Xtabay myth on one hand, and an indictment of everyday greed on the other. The inhospitable nature of the jungle, the mysteries that lurk within it, and the rhythms it maintains unfurl outward, ensnaring both Agnes and the harvesters. The language divide means they can’t communicate with her, but that doesn’t stop them from staring openly and lustfully at her, or Agnes from gazing right back.

Her arrival starts a slide into violence and infighting that compromises the entire group, a phenomenon that Mayan-speaking narrator Jacinto (Mariano Tun Xool) describes with a combination of awe and fear. Jacinto is the only man who worries that Agnes might be the reborn Xtabay, and his observations speak to the strangeness of realizing a story you’ve heard for years might actually be true. “I pity you for not understanding the mysteries of the jungle,” Jacinto says in the film’s opening line, but Tragic Jungle doesn’t suggest that Jacinto knows them, either. Maybe no one can.

Olaizola and Oggioni capture the men’s flickering, fluctuating emotions through revolving close-ups, and the unknowability of the jungle through scenes that reinforce its liveliness. Characters are distracted by one corner of the jungle or another. They get lost, walk in circles, and stare into the impenetrable brush, with Oggioni’s camera holding on whatever they think they might see. Tragic Jungle indulges in the suggested, and revels in the indefinite. Did one of the men really glimpse demonic bird feet on Agnes, or is he hallucinating from lack of food and water? When one of Cacique’s trackers asks whether Agnes is a real girl, is it a literal or figurative query? And when the blood of one of the men splatters on Agnes’ face, the droplets almost artful in their array, is her look one of shock, or serenity?

Like other jungle-journey movies, from Aguirre, the Wrath of God to Apocalypse Now, Tragic Jungle is devoted to the potential of karmic evil lurking in the jungle. Unlike those films, Tragic Jungle suffers from some slight character development, and relies a little too much on repetitive action scenes to build tension. But through the alien beauty of its visuals, Andrewin’s hidden-waters-run-deep performance, and its increasingly tense atmosphere, Tragic Jungle casts an unsettling spell.