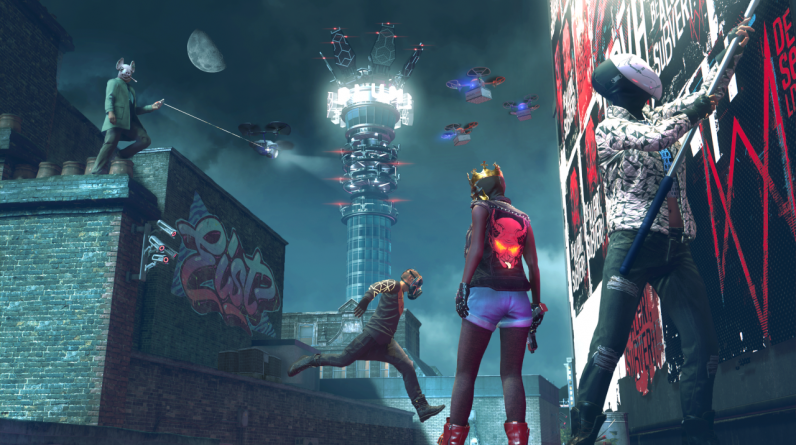 In the case of Darcey, she is a member of the Assassin brotherhood, and the first crossover between the Assassin’s Creed universe and Watch Dogs. But Legion live producer Lathiesshe Thillainathan told IGN that this crossover is more fan service, and should not be considered canon.

“She’s not canon, it’s purely a fan service from our side and also the [Assassin’s Creed] side,” Said Thillainathan who added that the Legion team is “not trying to build a joint universe between [Watch Dogs and Assassin’s Creed].”

Thillainathan acknowledged the speculation among fans that there is a connection between the two Ubisoft franchises (“We also read Reddit,” Thillainathan said) but this crossover is a result of the Watch Dogs team finding a fun way to work with the Assassin’s Creed team on a fan service project.

Fans of Assassin’s Creed will find a lot of familiarity with Darcey’s gameplay and movement style, and Thillainathan confirmed that Darcey’s back story will weave in AC lore. But the easter eggs in Watch Dogs alluding to Assassin’s Creed will remain, for now, just easter eggs. In regards to Watch Dogs: Legion’s crossover with Watch Dogs 2, we asked where Marcus Holloway, the protagonist from the game is, to which Thillainathan says that there will be “more to come.”

As for Watch Dogs: Legion Online and whether it’s closer to an open-world with multiplayer activities or similar to GTA: Online, Thillainathan says Ubisoft’s goal is to introduce a wide range of online activities shortly after release and then build out the components that gain traction.

“[We’ll] look at player engagement up until next summer and continue to grow it based on our players,” says Thillainathan. He cites activities like Spiderbot PvP and Tactical Ops and depending on where players gravitate towards, that’s what the developers will focus on building out.Thillainathan also stressed that Watch Dogs: Legion Online runs parallel to the single-player campaign. Meaning when Online launches, there will be a short onboarding process but players will essentially gain full access to the complete London sandbox from the get-go. The London map in Online will be the same one players will venture through in the single-player campaign, only completely accessible from the start.

“It has its own onboarding and its own story. So the co-op campaign is not the endgame for the single-player campaign,” Thillainathan reveals. There’s no gated content in Online either as one of the developers’ goals was to make Online as accessible as possible when it’s released in December. There will also be cross-progression between console and PC, regardless of which PC digital store you purchase Legion from.