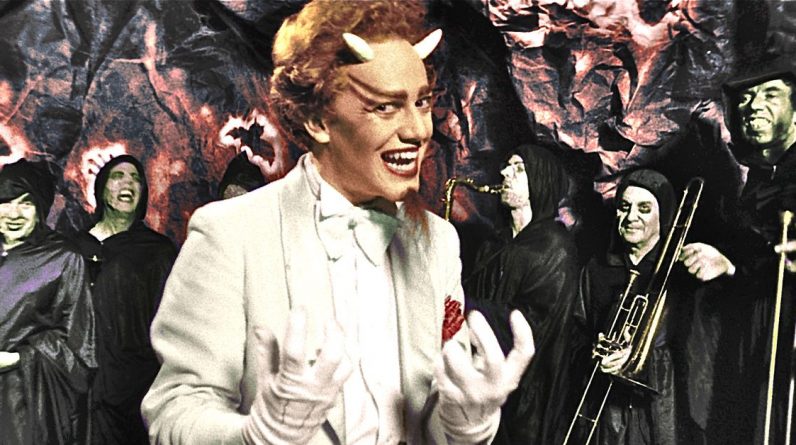 Back in 2015, director Richard Elfman announced that his 1980 feature debut Forbidden Zone threatens people. In a post-mortem with Rolling Stone, he continued, “They just go berserk, hating the film, and others loving it to the same degree for the same reasons.” He doesn’t actually use the phrase “cult classic,” but he’s outlining one of the major criteria that defines one. And few films have earned cult-classic status more aptly than Forbidden Zone.

The first three minutes go a long way in helping viewers determine whether they’re in the film’s love camp, or its berserk hate-camp. A text scroll places the action in Venice, California on Friday, April 17th at 4 o’clock. That’s the script’s lone tether to Earth. The film reveals that Huckleberry P. Jones, “local pimp, narcotics peddler, and slum-lord,” has discovered a portal to another dimension in one of his stash houses. Elfman then launches his running homage to movie musicals of the pre-war era by representing Jones as a old-fashioned blackface caricature, first in cartoon form, then in antic live-action. The Al Jolson doppelgänger hightails it out of the house, and just like that, we’re descending into the hand-drawn bowels of the interdimensional rift for the credits sequence.

To the New Wave strains of the Mystic Knights of the Oingo Boingo, we’re fleetingly acquainted with a series of oddballs, including frog-headed butler Bust Rod and a nameless, topless princess. The train is leaving the station, and by that time, everyone in the audience is aware whether they’re going along for the ride, or jumping off.

Forty years ago, The Forbidden Zone’s theatrical release prompted arson threats from moviegoers, and a formal ban from the University of Wisconsin. These days, it’s easier than ever for people vibrating on Elfman’s sui generis wavelength to join him in this realm of madness. The widespread availability of streaming cult titles has scrubbed away some of the mystique that came with the former rarity of this sort of film, but Forbidden Zone’s sheer gleeful-strangeness quotient still humbles that of any big-screen musical that’s come since. In keeping with the theme of reality-hopping, Elfman envisioned genre as it might have evolved in an alternate universe, overhauling musicals and the booming science-fiction tradition with equal imagination.

The project was conceived as a platform for the central band, which shortened its name to Oingo Boingo soon after the film was shot. At the time, Oingo Boingo was under the stewardship of Richard’s younger brother Danny, who later found fame as a Tim Burton collaborator and one of the most recognizable composers in cinema. (Danny Elfman appears in the film as a slickly attired Satan, conducting a rickety band of goblins in a demonic rendition of Cab Calloway’s vaudeville ditty “Minnie the Moocher,” approved by Calloway himself.)

But the elder Elfman seized the film as an open opportunity to indulge his own pet fascinations with obscure pockets of the past, particularly whiz-bang science fiction and vintage Hollywood. He found more to emulate in the retro likes of Flash Gordon than the sleek futurism of the then-ubiquitous Star Wars. Elfman married an anything-goes filmmaking ethic to Anything Goes, and the result is unmistakably the work of an artist who’s singularly committed to his bit.

The film’s threadbare plot follows the dysfunctional Hercules family as they venture into the Forbidden Zone via the portal underneath their new home. Hot-to-trot daughter Frenchy was portrayed by Richard Elfman’s then-wife Marie-Pascale, who also designed the German Expressionist scenery as part of a DIY group effort that included all union actors putting their own checks back into the budget. She’s the first sucked into the domain of the tyrannical queen Doris (Susan Tyrell) and her diminutive King Fausto (Fantasy Island star Hervé Villechaize, Tyrell’s lover at the time), along with the rest of her family, local tough Squeezit, and his transgender sister René (both played by Elfman’s boyhood best friend and Oingo Boingo bassist Matthew Bright, then going by “Toshiro Boloney”).

The loosely connected series of bizarre, baffling occurrences that make up the film mostly serve as scaffolding for Oingo Boingo songs and Elfman’s mad experiments with B-movie style. He consciously went against every dominant trend in science fiction, which then favored space-age shine, gleaming chrome, and high-tech industrial corridors. Even though Elfman was working on a shoestring budget, he embraced the cheapness and fakeness as an alienation offensive. His notion of the Sixth Dimension did away with high-tech teleportation and sophisticated design: portaled victims get gobbled up by what looks like a great beast’s mouth, then pooped out into a rickety new world that feels all the more foreign because it’s so ramshackle. This is science fiction to the same extent as The Rocky Horror Picture Show, a consciously freaked-out perversion of 1950s-era precedents.

The nostalgia and innocence of those ’50s inspirations gave Elfman even more room for wanton subversion. The tumble into the Forbidden Zone tips its cap to the gonzo 1941 dance showcase Hellzapoppin, which begins by sending a gaggle of partygoers down a funhouse slide into the underworld. That film helped popularize the Jazz Age technique known as the Lindy Hop, which Elfman revives with a jaunty classroom singalong led by a teacher in two-bit drag, performed by avant-garde duo The Kipper Kids with a grumpy, dumpy Adolf Hitler. They warble through a few bars of an alphabet song taken from an old Three Stooges one-reeler before the whole thing veers into a red-hot jump-and-jive number, complete with full-split choreography from cool cats harkening back to the Lindy Hoppers of swing’s heyday. Hellzapoppin eventually pulls back the curtain on its own artifice, revealing that the whole thing is a film within a film. Elfman starts from that admission, then keeps burrowing further into his own finely wrought fakery.

Forbidden Zone’s title doubles as a cheeky comment on its nature as an outsider object. It’s a conscious artifact of fringe culture, with its outré design, racial and gender provocations, and queer undertones so palpable that they’re just tones. Back in 1980, Elfman and his demented labor of love seemed unstuck in time, but the intervening years have revealed that he was simply ahead of his. As the Internet has let simpatico nutcases answer Elfman’s clarion call, what may have initially seemed like a lack of polish can be revealed as creative self-assurance. The film’s loyal following, including curio connoisseurs like John Waters and Paul Reubens, understands that this isn’t what The Simpsons’ Moe would refer to as “weird for the sake of weird.” For audiences who are hip to Elfman’s eclectic set of reference points, and unintimidated by his taste for camp, it all makes perfect sense.

The Forbidden Zone is streaming on Hoopla and Fandor, and is available for digital rental on various services.