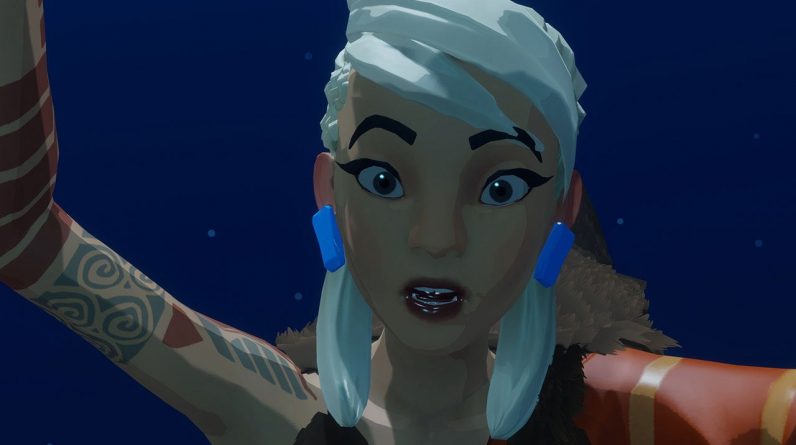 Washed ashore on a remote island with nothing but a knife and my wits to protect me, I was immediately grabbed by Windbound’s opening moments. In this seafaring adventure you must harvest materials and craft tools to keep main character Kara alive as she navigates through a series of procedurally generated archipelagos in her search for the other surviving members of her tribe. Unfortunately, the combination of exhausting survival mechanics and a paper-thin plot meant that neither the voyage nor the destination proved to be worth the time and effort. Windbound takes an intriguing premise and completely blows it.A gorgeous painterly aesthetic gives the impression that Windbound could be set somewhere off the coast of Hyrule, but that’s largely where comparisons with The Legend of Zelda end. While it does feature a lead character with an insatiable appetite for smashing pots, Windbound otherwise lacks the dungeons, environmental puzzles, flexible combat, or boss fights typically found in one of Link’s legendary adventures. Instead, Windbound leans hard into a survival-based grind that makes Breath of the Wild’s breakable weapons seem like little more than a minor inconvenience.

Before you begin the adventure you’re instructed that the ‘Survivalist’ difficulty setting is ‘the full Windbound experience’, and so that’s exactly what I chose to play it on. Survivalist strips you of most of your inventory and returns you to the beginning each time Kara perishes, and I found those high roguelike stakes made me particularly careful about which beasts to engage with and which craftable objects to prioritise as I made my way from one island to the next.

There’s a fairly extensive crafting system at Kara’s disposal, as almost everything in her surroundings – from grass and sticks to animal bones and hides – can be gathered and converted into rudimentary tools like shovels and hammers or enhancements to her boat in order to make sailing speedier. But aside from a basic boat and perhaps a sharpened stick to defend yourself with, none of it feels particularly essential. You can play all the way through Windbound’s story existing on a pacifist’s diet of mushrooms, avoiding all enemies and not making a single modification to your canoe. There aren’t any creatures of significance that force you to strengthen Kara’s combat capabilities in order to overcome them, nor are there particular stormy seas that require extensive boat upgrades to cross. There’s all this crafting to do in Windbound, but no compelling reason to bother with any of it.

In fact, the most persistent threat in Windbound isn’t the deadly inhabitants of its islands nor the turbulence of its waters; it’s the rumbling of Kara’s stomach. Windbound’s hunger meter constantly nags at you to drop anchor at every landmass you see in order to search for food, a search that can frequently prove futile when the procedurally generated island you manage to land at has no procedurally generated flora or fauna to eat. Worse still, any food you carry with you is often likely to spoil before you need to eat it.

Indeed, starvation proved to be the direct cause of the majority of my deaths early in Windbound as I got to grips with its systems. Still, I was otherwise content to play on the Survivalist setting – that is, until midway through the fourth chapter when, with a full bar of health and a recently topped-up hunger meter, I was suddenly killed by a single hit from a shark-like beast that charged my boat in the middle of the ocean; quite literally out of the blue. The next thing I knew I was waking up on the shore at the beginning of the first chapter, some six or seven hours of progress washed away like a sand castle in a rising tide. This abrupt and seemingly unavoidable demise left a salty taste in my mouth that had nothing to do with swallowing too much seawater, and needless to say after that I switched the difficulty to ‘Storyteller’ and kept it there for the remainder of my Windbound playthrough.

Whatever Floats Your Boat

Storyteller mode certainly makes progress easier since enemies are weaker, and if you die you can restart with your full inventory intact at the beginning of your current chapter rather than all the way back at the start. But Windbound’s plot is so scarce, and its objectives so repetitive, that once you’ve stripped away the more challenging survival mechanics and roguelike structure you really aren’t left with a particularly engrossing adventure.

Each of the five chapters of Windbound feature three randomly placed but structurally indistinct tower beacons that must be found and activated before you can pass through an exit portal. The story, or what evidence there is of one, is mostly told either through cryptic text that occasionally appears onscreen or via a static mural that is gradually revealed upon the completion of each chapter. That’s it. In story terms there’s no reason to really explore Windbound’s waters since, at least from my time with it, there appears to be no characters to meet or unique structures to uncover. There’s just not enough mystery to lure me into clearing the fog off each of its maps, since invariably the most exciting discoveries to make are merely shrines to increase the limits of your health and stamina bars. Windbound hints at an ocean of possibilities at its outset, but ultimately delivers an adventure with all the depth and excitement of a wading pool.

Windbound hints at an ocean of possibilities at its outset, but ultimately delivers an adventure with all the depth and excitement of a wading pool.

In fact, the biggest mystery that confounded me in Windbound was trying to figure out why the developers didn’t include a minimap. I’m totally in favour of eliminating minimaps to make exploration in open-world games more immersive – most recently exemplified by Ghost of Tsushiba – but I honestly feel like that’s a far more practical design choice when you have landmarks to navigate by. In the case of Windbound, the lack of a minimap or even a simple compass meant I was constantly pausing to check the in-menu map as I sailed across huge swathes of empty ocean with nothing on the horizon to orient myself with, which made already lengthy journeys even more sluggish.