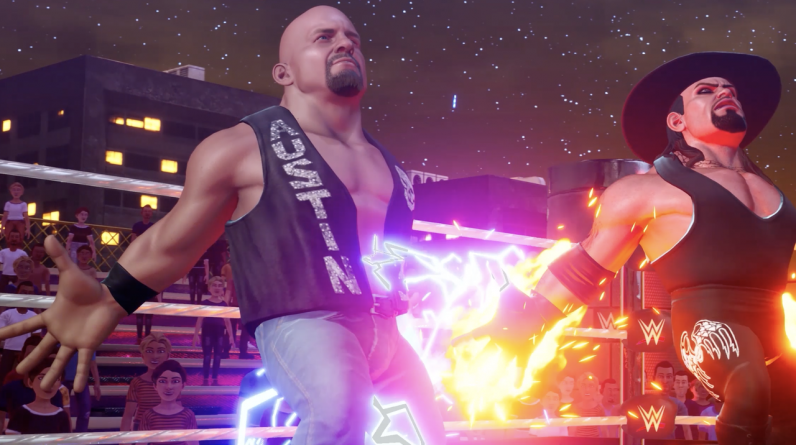 WWE 2K Battlegrounds isn’t just bringing a different look and feel to the mainline WWE 2K wrestling sims, it’s also bringing a story-based campaign.
Speaking to IGN, executive producer Sean O’Connor explained that the spin-off game’s Campaign mode will see legendary WWE agent Paul Heyman on the search for the next WWE Superstar, with help from ‘Stone Cold’ Steve Austin. Players will pick from 7 new hopefuls – specially designed for the game – and compete to earn a contract across multiple maps and arenas.

“It’s told through these really cool comics, “says O’Connor, “and you take them through trying to earn a contract, and eventually get to Wrestlemania.”O’Connor adds that the mode isn’t just a linear set of matches: “I can’t even remember exactly how many matches and nodes there are – it’s kind of a branching thing. There’s some things you can do off on the side and earn different rewards, or you can just do the golden path straight through the middle to finish it sooner if you want.”

Playing the campaign will earn you new elements to use throughout the rest of the game, too. Per O’Connor: “We unlock a lot of arenas, vanity items for your created characters, different power-ups, things like that as you go along through the campaign.”

As for what the game will actually play like along the way, Battlegrounds will mix familiar wrestling moves with slightly wilder moves and even power-ups like Flaming Fist, Ice Breath, and an Earthquake that can destroy the ring itself. The game takes inspiration from WWE All-Stars, among other WWE games over the years.

“We’re trying to be over-the-top, arcadey, easy to pick up and play,” explains O’Connor. “A lot of stuff to master, though, so you can really take your game to the next level. It goes very much with the art style […] where it’s kind of a wider appeal – it’s clearly not realistic, right? And our moves are not realistic, as you’ve seen. Think about throwing somebody into a crocodile! That’s not very realistic, but it’s super fun and it’s super over the top, and the power ups play really well into that as well.”

WWE 2K Battlegrounds will come to PC (via Steam), Nintendo Switch, Xbox One, PS4 and Stadia on September 18. We learned that release date, and a lot more new details today.