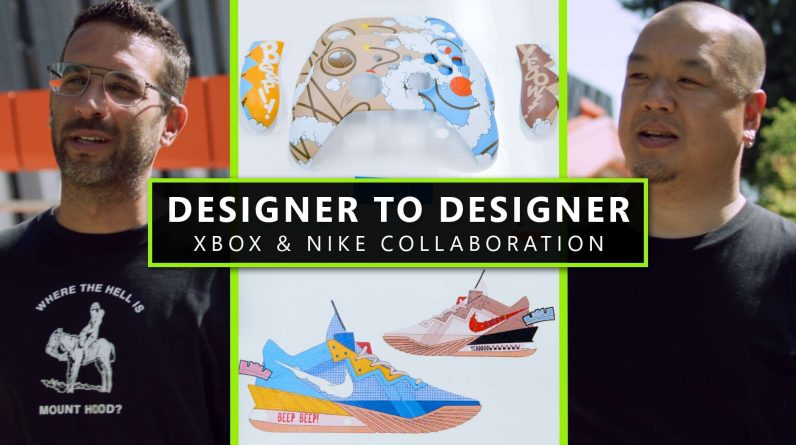 After many months collaborating with Warner Bros. and Nike, Xbox is excited to officially unveil an exclusive “Space Jam: A New Legacy” feature film-inspired Xbox Wireless Controller and sneaker bundle. Launching in the Nike SNKRS app in North America on July 15, the bundle includes a Road Runner vs Wile E. Coyote Nike LeBron 18 Low and – for the first time ever on the Nike SNKRS app – an exclusive Road Runner vs Wile E. Coyote Xbox Wireless Controller. This special release duo features a design inspired by the classic and relentless Looney Tunes chase between the crafty Wile E. Coyote and the ever-elusive Road Runner.

Taking inspiration from Wile E, Road Runner and the LeBron 18 Lows, the Xbox design team set out to tell a deeper story and bring together the controller and sneakers in a scene representative of the classic Looney Tunes rivalry.

Nike Senior Designer of Footwear Jason Petrie brought to life each of the beloved Looney Tunes with the LeBron 18 Lows. The left shoe represents Wile E. in earth tones with a Nike logo that looks like an ACME contraption set to trap Road Runner, while the right shoe features Road Runner blue tones with a touch of yellow and a Nike logo enveloped in dust clouds.

The controller brings elements of each shoe together and is the aftermath of a Wile E. Coyote and Road Runner encounter. For the lucky ones that get the product collection, they’ll be able to see up-close the chaotic scene with dust clouds of the Road Runner settling as he speeds across the controller and the many cobbled contraptions of Wile E Coyote’s foiled attempts. The controller seamlessly blends the relationship between the shoes and characters, completing the story while living up to the unique expression of the LeBron 18 Lows.

We also made sure all details on the controller hinted to details on the LeBron 18 Lows. The Road Runner vs. Wile E. Coyote Xbox Wireless Controller has a textured grip and a hybrid D-pad—which perfectly integrates the iconic ACME logo. On the sides of the controller, fans will notice the memorable phrases of “Yeeow!” and “Beep! Beep!” highlighting the physical humor of the Wile E. and Road Runner.

To get fully immersed in the world of Looney Tunes, test the new Road Runner vs. Wile E. Coyote controller on Space Jam: A New Legacy – The Game, the official film-inspired arcade-style video game launching exclusively into Xbox Game Pass Ultimate Perks today and available free-to-play for all fans through the Microsoft Store on July 15. Xbox also recently announced three controllers inspired by the Tune Squad, Good Squad, and the Warner Bros. Serververse from “Space Jam: A New Legacy,” available for retail purchase on July 8 in North America. In the meantime, keep your eyes on the SNKRS app and stay tuned for the official bundle drop on July 15.

About “Space Jam: A New Legacy”

Welcome to the Jam! “Space Jam: A New Legacy” stars LeBron James and is from director Malcolm D. Lee and the innovative filmmaking team that includes Ryan Coogler and Maverick Carter. This transformational journey is a manic mashup of two worlds that reveals just how far some parents will go to connect with their kids. When LeBron and his young son Dom are trapped in a digital space by a rogue A.I., LeBron must get them home safe by leading Bugs, Lola Bunny and the whole gang of notoriously undisciplined Looney Tunes to victory over the A.I.’s digitized champions on the court: a powered-up roster of professional basketball stars as you’ve never seen them before. It’s Tunes versus Goons in the highest-stakes challenge of his life, that will redefine LeBron’s bond with his son and shine a light on the power of being yourself. The ready-for-action Tunes destroy convention, supercharge their unique talents and surprise even “King” James by playing the game their own way.

Warner Bros. Pictures Presents a Proximity/The SpringHill Company Production, a Malcolm D. Lee Film, “Space Jam: A New Legacy.” The film will be distributed worldwide by Warner Bros. Pictures. It will be released in theaters nationwide on July 16, 2021 and will be available in the U.S. on HBO Max for 31 days from theatrical release.

For information on Space Jam: A New Legacy, visit https://www.spacejam.com/.